Menu
Search Login Search
close
Camping
Hiking
4wd & Caravan
Travel
Footwear
Clearance
Free delivery to most of Australia on orders over $49!Please know that this is just a fancy guide the graphic designer whipped up.For exact delivery cost & times, refer to the delivery tab on each product page or in the checkout.view all delivery info 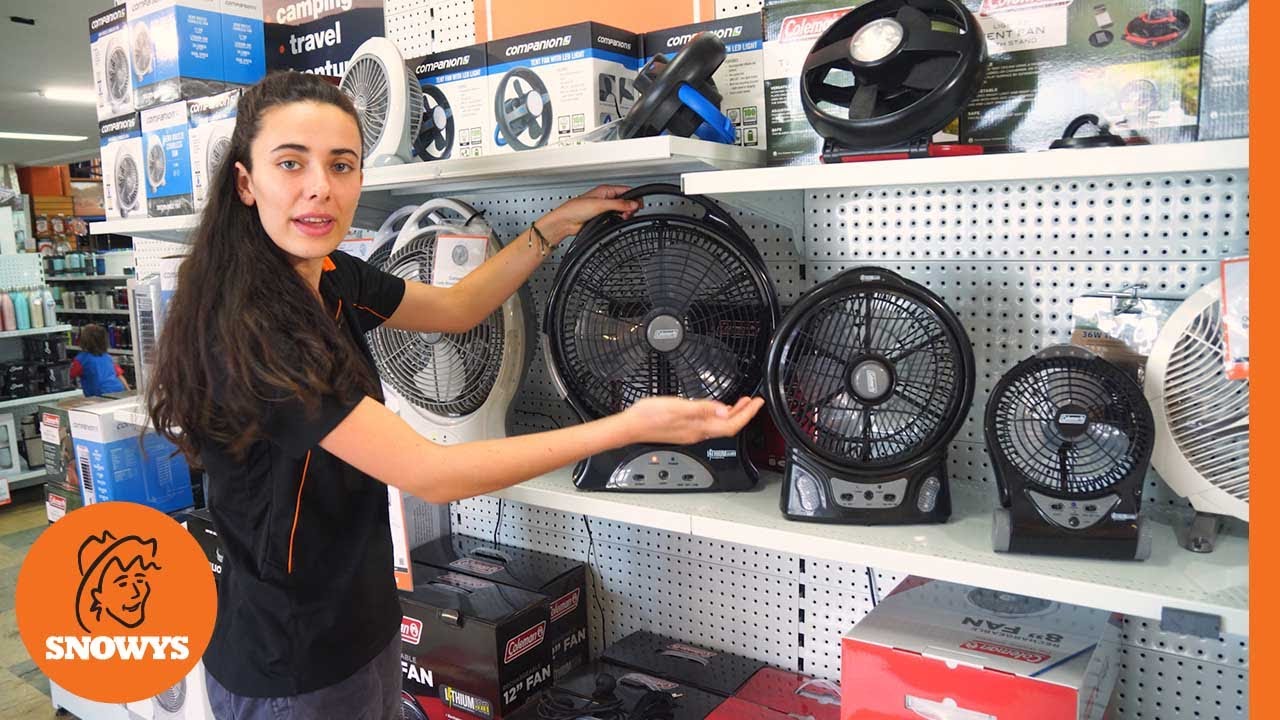 
View all delivery info
Clearance items: Please note, unless faulty, this item cannot be returned or exchanged. As well, depending on the shipping location, please allow an extra day or two for delivery.

If your tent gets stuffy in the warmer months, then the 12” Lithium Ion Fan from Coleman is a summer camping must-have.

This fan is the perfect size for larger tents or a caravan and comes with a lithium ion battery that’s rechargeable and will turn green when fully charged. It comes with LED lights that can be operated independently and has two fan settings for use. You can also run it on 12V or 240V depending on your set up, as it comes with the adaptors included.

Bring back airflow to your outdoor shelter when the weather heats up with the 12” Lithium Ion Fan from Coleman.

This is a fantastic fan, I am very impressed with all it's features. Quiet, efficient, and running it on the battery works really well. I would recommend this product to anyone. Thank you Snowys :)
CL - Traralgon, VIC
5
Feb 02 2020

Best fan ever for inside and in tent and Van

Fantastic, doe’s not draw a lot of power and we use it in our Van and house and our tents I have 2 now highly recommend these fans. Great light on the sides for night time. Also very powerful ✅✅✅✅✅
Julie - Mulgrave, VIC
5
Jan 17 2020

So pleased with the fan wonderful thanks
Pat - Bomaderry, NSW
Page 1 of 1

Charge and run at the same time on 12v? How much current used?1 answer

Hi, I know the previous version (non lithium) had a few reported issues with runtime, charging light and unable to run and charge at the same time. Can you tell me if any of these issues have been ironed out in the new version? How much current does this version use? Thank you.

The light simply stays on and lit red when charging, it doesn't appear to turn off when charged but Coleman don't state that it does in the documentation.

As for the current draw, the only extra information I have to give you is the maximum watts for each, which 16 16W for the 16" version and 20W for the 20" version and inside is is a 7.4V, 4Ah battery. The fan appears to run whilst charging but it needs to be on the AC setting to do this. This is still the case whilst plugged into a 12V source i.e. the switch needs to be on AC, in which case there is probably no net gain on the battery as it is both running from and charging the battery at the same time.

If plugged into a DC source with the switch on DC, the fan will not run... strange, I know, but it does work.

To date we've had no negative feedback on the accuracy of the runtimes for these, I guess time will tell how accurate the stated time is, but for now, things are looking positive.

Can the oscillating (12") and twist (8") feature be disabled? According to another website it can, however it's not mentioned in the videos, and I can not find a reference to the product on the Coleman website (slack).

I've just tested our display models and the oscillating feature can either be on STOP or OSCILLATE (12"). The 8" has a twist cap that will either stop or freeturns a front circular disk.

Just wondering what the benefits are (other than lighter) over the non-lithium-Ion version of this fan. Will it run off DC poiwer directly if the battery is flat?

You've hit the nail on the head there with the weight factor. Lithium batteries have a longer overall life span than lead-acid batteries and are much lighter, hence the weight difference here. Yes, you can run the unit directly off DC when the battery is flat.

Choose the items you love and select Zip at checkout

We pay the store, you get the goods, nothing to pay today

Choose how you pay us back over time, interest free

*A $6 monthly account fee applies. Pay your balance by the due date
(the end of next month) and we'll waive the fee. See full Ts & Cs

GET YOUR GEAR NOW AND PAY LATER... INTEREST FREE!

Pay for your order in equal fortnightly payments

GET YOUR ITEMS NOW

Your order will be shipped now, just like a normal order

NOTHING EXTRA TO PAY

No interest, no additional fees if you pay on time*

ALL YOU NEED IS


TO USE THIS SERVICE

OTHER THINGS TO NOTE