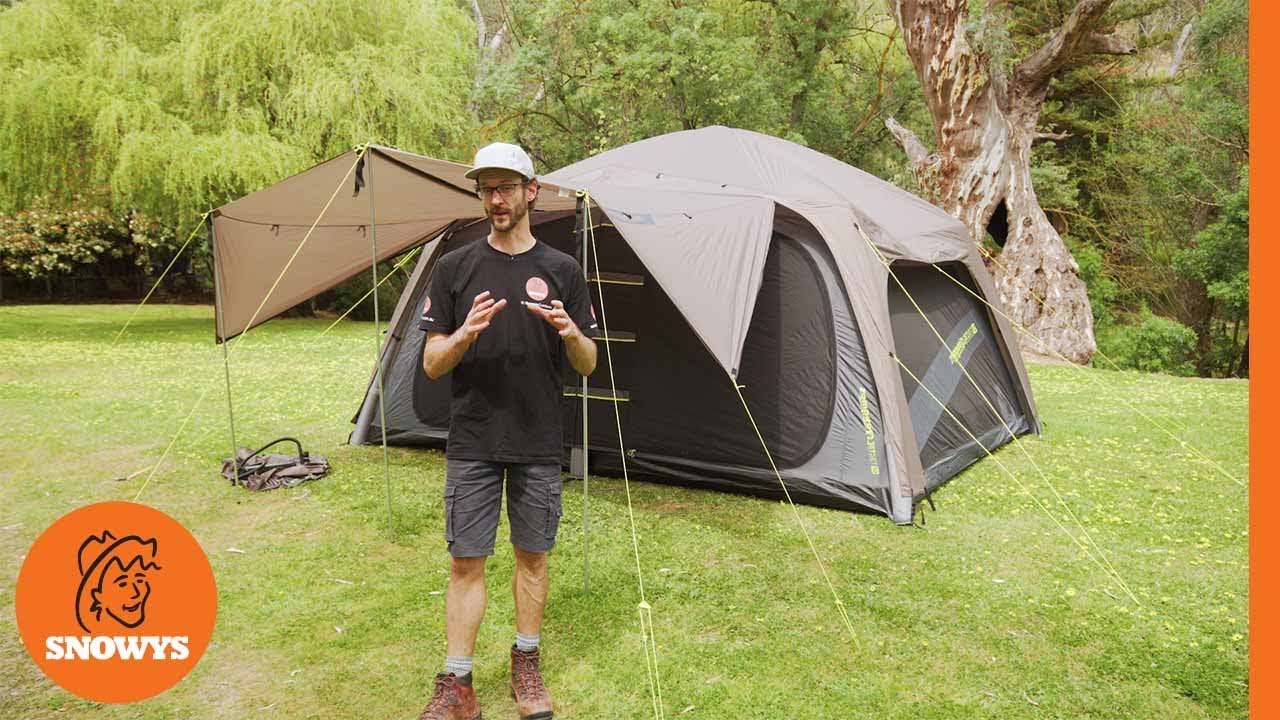 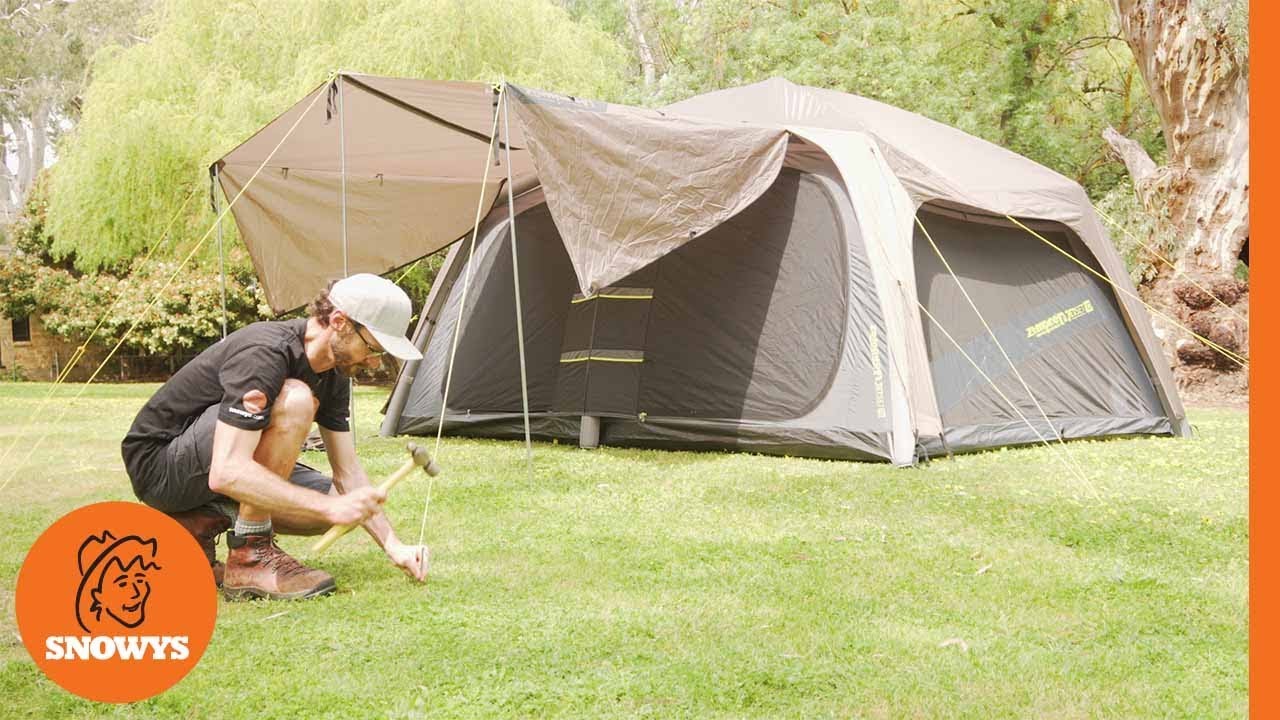 Zempire Jetset 10 Inflatable Air Tent
> How to set up & pack away
Clearance items: Please note, unless faulty, this item cannot be returned or exchanged. As well, depending on the shipping location, please allow extra time for delivery.

The Jetset 10 from Zempire allows you to pitch a family-sized, luxurious and weather-protected tent in under 10 minutes thanks to the reliable air pole design.

The single inflation point and included pump makes the air poles quick to inflate in under 10 minutes, so it’s perfect for families that want a roomy tent without the fuss of threading poles. Using fabric for the fly that’s torrential rain tested, UV treated, PU tape seam-sealed and with an impressive 5000mm waterhead rating – so you’ll be well protected from the elements. You can also unclip the fly in clear conditions, to enjoy a view of the stars through the full mesh roof. Stepping inside the tent, there’s an open plan layout with a central dividing wall for privacy and twin storage areas at the rear that you can access internally through the zips closed mesh flaps.

You can access the tent from the twin doors, set up the gullwing door as an awning for protection from the weather, and keep your essentials handy while you’re relaxing outside your tent in the front storage pockets. Spacious, reliable and modern – the Jetset 10 from Zempire will shelter you and the family on all your camping adventures.

Is the mesh midge proof, or only mozzie proof?

Zempire doesn't explicitly state whether the mesh is midge proof or not, so it would be best to combine your set up with some repellant in areas where you might be likely to encounter lots of midges.

From Ben’s video, the tent features mesh ventilations on the top of the tent(under the fly). Can those ventilations be fully closed. Thanks

I've just double-checked our display model and the top mesh ventilation panels aren't able to be closed, they are mesh only.

Hey guys How well does this tent hold up in windy weather? Would it perform as well as other mid priced tents such as the Coleman instant up 10 Cheers

The Jetset 10 is designed for use in most conditions, however Zempire do specify that it isn't designed to withstand storm conditions of strong winds, so it's always wise to proceed with caution in variable weather. If the guy ropes and peg points are well secured we would be fairly confident that this tent will have similar performance to the Coleman Instant Up Tents.

I have a Jetset 10 and have been informed that the series 1 had issues with the tubes exploding with high heat (35 plus degrees). This was addressed with a series 2 model that come out (can tell by the barcode) Can you please let me know if this comes under a warranty issue where i can get replacement tubes for my tent. I do not want to be camping and suddenly have my tent collapse on me and my family.

Thanks so much for your question!  Zempire are an awesome company with great after-sales service.  We also have a dedicated Warranties department so if you do have any issues with your Jetset Tent tubes you'll be well supported!  Head to our Warranty Information Page for more, otherwise, give us a call on 1300 914 007 or shoot us an email to service@snowys.com.au if you have any further specific questions.

Is the pump compatible with the queen double high mattress you show in the video and how hard is it to actually pump? you looked a little outa breath Ben lol.

Great question! Unfortunately, the Jetset pump is not compatible as it needs a specific bayonet fitting to fit into the air mattress opening.

Pumping up the Jetset does take a bit of effort especially those last few pumps! It's all worth it though, as you then have a very strong and sturdy tent.

Hey guys, we are keen as for this tent for camping in WA but after inspecting it we are nervous as to it's suitability to camp in the South West (it's much cooler down there)… Any idea whether we'd likely freeze our butt off in this tent if we took it south (obviously not in middle of winter!)? Cheers - love your site!

The Jetset 10 shouldn't be a problem in cooler conditions. It has dual layer mesh and solid panel windows at the front and sides so you'll be kept protected from the weather and be just as warm as any other tent.

Is this a warmer season tent?1 answer

The look of this tent makes me think it's more suited to warmer weather. How would it compare with a tent that has a full fly, eg Coleman northstar dark 10p? Thanks

Both the Jetset and the Northstar are considered 3-season tents, so it's probably best to avoid mid-winter camping with either choice.  If you're concerned about the waterproofing, Zempire has given this one protection for an impressive 5000mm, as against 3000mm on the Northstar.  I don't think there's cause for concern about the lack of full fly as the windows are waterproofed and the whole tent has been tested in torrential rain.  The inflatable frame is more forgiving when subjected to a little rough and tumble too ie. kids mucking around or falling against a pole, or when the wind picks up.  We find the poles bounce back into shape unlike the instant-up frame which has steel poles and plastic joiners.  Ben might offer you a little reassurance in our YouTube clip as he specifically mentions the waterproofing on the Jetset, including the fly design.  Cheers mate :)

is the pump supplied with the tent, or a separate purchase?

Yes the Jetset 10 Inflatable Air Tent is supplied with a Double Action Pump.

Will this connect to an aerobase gazebo?1 answer

I am looking at purchasing this tent as well as an aerobase 3 or 4 gazebo. Is there a connector going to be made available to connect the two?

It'd hard to give you an exact answer given we're yet to see the Jetset 10 (it's a brand new model). However based on the structure of the Aerobase 3/4 and the front of the Jetset 10 they won't directly connect, however you could set them up quite close to each other with the front awning of the tent overlapping the Aerobase a little.